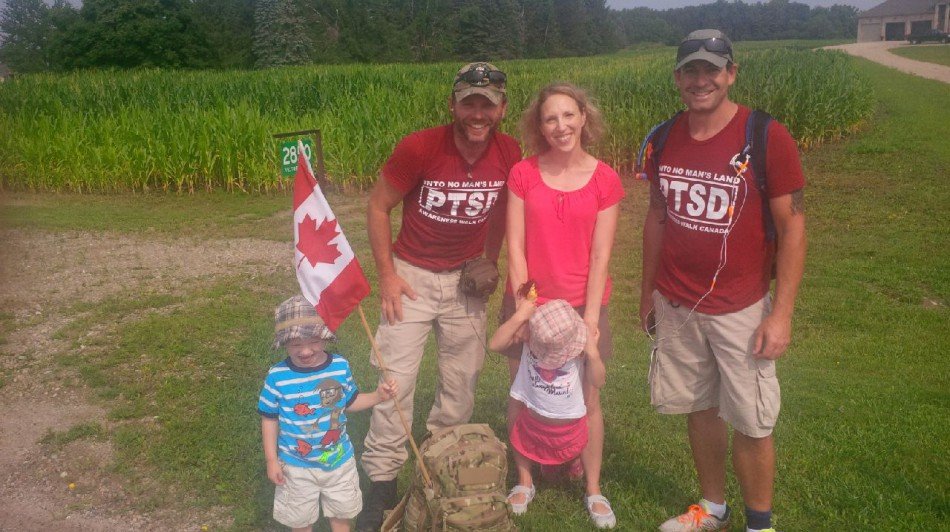 In August, I had the privilege of meeting with Steve Hartwig and Jason McKenzie as they traveled through Guelph on a trek across Canada. They served with the Canadian Armed Forces in Yugoslavia in the early 1990s and have battled PTSD since then. Starting from Victoria in June, they have been walking across the country with fellow CAF veteran Scott McFarlane to raise awareness of PTSD in military personnel and first responders (firefighters, police, paramedics, medical staff, nurses). These guys are truly inspirational because they are, quite literally, walking their walk. Every day they walk 32 km. They are sore, they are tired, and they miss their families. But they are out walking to make people aware that PTSD is not a sickness or a disease, but that it is the result of being exposed to trauma. They want to shed the stigma surrounding PTSD and highlight the need for more treatment resources so that people can get help.

I was able to talk with Steve a little bit about what I know of PTSD, gained from a literature review HSI® conducted last year looking at PTSD in first responders. While conducting the review, I found that military and first responders have higher rates of PTSD than in the general population. One estimate for PTSD in veterans of Operation Iraqi Freedom and Enduring Freedom was as high as 20%. Another study estimated rates of PTSD for emergency service personnel responding to 9/11 as 9.3% for police offices and 31.9% for non-police officers. One study that stuck in my head looked at firefighters and reported that PTSD rates are higher for firefighters who have witnessed the death of a child or a fellow firefighter.

During our brief talk, Steve was very open about his battle with PTSD and what it has cost him personally. Our discussion put life to what I had read about PTSD: the causes, the symptoms, the outcomes, and the need for readily available effective treatment. I have nothing but respect for our military personnel and first responders who are willing to put themselves in danger, both physically and mentally, and to endure situations I cannot imagine in order to ensure our safety and security. I hope that the Into No Man’s Land PTSD Awareness March does indeed help shed the stigma of PTSD and ultimately help increase treatment resources so that these brave men and women can get the help they need to ensure their own quality of life.

For more information related to the Into No Man’s Land March, click here.